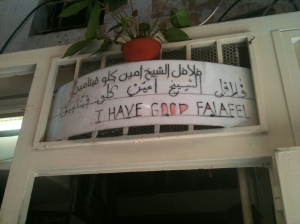 So much of this trip has been about food.  Dancers of course must eat.  So must the rest of us.  This noon Emma, Andrea, Marcie and I walked over to the Old City to find some falafel which we eventually did, under the sign above.

Personally I am  not enamored of the Old City as it’s crowded, people are rude and out of touch with themselves in space (hence a lot of jostling and clogged passageways that are narrow to begin with), and the sheer volume of religious souvenirs is plenty with which to grasp the story of Jesus and the moneychangers.  I found the Arab quarter with the most energy and life.  That is where we found our falafel on Shabbat, when pretty much the whole city closes up.  Mind you they drop things like french fries and potato chips into the pita pockets that also contain the falafel and cabbage, lettuce, pickles….throw in some spices and perhaps some hummus and you’ve got a meal that’ll really stick to your ribs.

Attempting to summarize this journey is impossible.  I’ve been so busy that there’s been no way to make notes in the handwritten journal much less blog.  Encountering the klezmer band in the walkway at Mamilla Mall at the start of Shabbot.  Walking through Masada and floating on The Dead Sea.  The company performing at Sherover Theater and discovering at the last minute that one of the drops was stuck in the flyspace so they had to dance in front of one drop rather than the usual transition from one to the other midway through the dance.  Visiting Tel Aviv twice, once to explore the ancient port of Jaffa and swim in the Mediterranean and dine with the marvelous Gappel family; the second time to dine at The Salon, star restaurant of Israel’s most famous chef, Eyal Shani. A  few days later, Shani’s “Chance Brunch” at the Israel Museum, a fundraiser for the Jerusalem Season of Culture, one of our host organizations.  Dining al fresco at the home of two Israeli academics, the Rokems, and feasting on broiled grouper in tahini and pasta with sundried tomatoes and poached zucchini with dill.  Watching children dance in front of the spectacular Anish Kapoor sculpture Heavenly City on the grounds of the Israel Museum, and wandering the Noguchi-designed sculpture garden on the same 20 acre campus, the scent of jasmine wafting through the air.

Dancing before the Anish Kapoor

Tonight we finish, tomorrow the company travels on to Moscow and I return to the U.S. of A.  More reflections on Israel then. Perhaps.  I did enjoy a contemporary version of a burning bush at The Salon, when the chef’s countertop was purified by fire after all of the chopping and cooking was done. 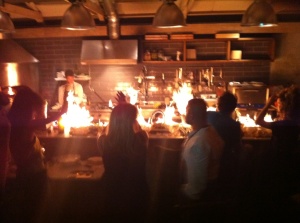