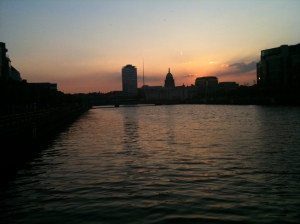 Ireland has always held mythological status in our family.  “The old country,” my grandmother used to call it.  (Her mother was Bridget Flanagan.)  Like many Americans I still have distant cousins here, mostly in the west of the country.  “Ah yes,” one Irishman said to me yesterday. “I would’ve said your people are from the west.  You look it.  Shannon?”  Yes, I said.  They’re from near Shannon.

Yes indeed, as long as I say nothing, I pass.  It is rather astonishing to be in the place rather than the idea after hearing so long of the idea of the place.

I arrived yesterday morning in an astonishingly dense fog, after seven or so interminable hours on an Aer Lingus flight from Chicago.  At least it was non-stop, with no volcanic ash disrupting plans.  Jet lag is of course brutal for the first 24 hours (I love the Japanese phrase for this, “jisa boke,” which is translated “time dumbness.”).  You crash, you get up disoriented, you walk for a bit, you think you are going to go to sleep again but discover you can’t, you (in my case) end up in a theater and try to watch dancing and end up battling going to sleep…and so it goes.  But on Day Two the brain starts to re-organize and things begin to improve.  And Dublin is easy to fall in love with.  Especially on two unbroken days of warm spring sunshine.

The reason for this trip is attending the closing weekend of the Dublin Dance Festival, a marvelous three-week program of modern and contemporary and experimental dance that occurs here every May.  So far I have seen four presentations (including two mixed-bill programs featuring Ireland-based choreographers and dancers), most recently the beautiful Jean Butler (of Riverdance fame) in a Tere O’Connor work entitled “Day.”  Butler is wildly famous here, and her departure from traditional Irish dance to work with a very postmodern choreographer in the American O’Connor was described to me this afternoon as “like Baryshnikov leaving classical ballet to do postmodern dancing.”  The 40 minute solo was beautifully performed (she wore a deep sapphire blue dress, her strawberry blonde hair in a bun on her head) and demonstrated those signature elements in Tere’s work, the pauses to reflect, the sudden spurts of action punctuated by  elongated gesture, the luxurious drops into the floor, the looping shifts in rhythm.  I won’t give it a total rave as I am always somewhat perplexed by his more recent choreography and this work was no exception.  The “but” is that with a performer of this quality and nuance, who cares whether I can make sense of the dance as a whole.  Furthermore, I find the provocation of the often-disjunctive phrasing in Tere’s work stimulating.  So, pearls to them both, especially Ms. Butler, for plunging bravely into a different movement world.

Yesterday afternoon’s Irish showcase included a duet by one of Ireland’s pre-eminent modern dance choreographers, John Scott, with strong, touching performances by American dancers Marc Mann and Michael Snipe.  “ACTIONS” is exactly that, and is a duet that should be seen over and over as it shifts and changes with each performance.  The two men work together and independent of one another in this process-oriented dance,  offering up a study that smartly blurs the lines between rehearsal and performance.  More pearls.

It’s a pearly sort of weekend. 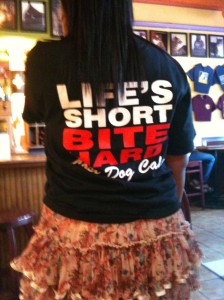 I went to Virginia over the weekend to see the folks and had lunch at The Stray Cat in Arlington.  This restaurant is a few doors down from its sibling cafe, The Lost Dog.  I was there with my goddaughter, her mother, and HER mother.  Much catching up ensued.  I  fixated on the Lost Dog t-shirt that the hostess was wearing, proclaiming “LIFE’S SHORT BITE HARD.”  My goddaughter fixated on the skirt and how it was attached to the rest of the outfit.  (I asked, when I asked to take the picture.  It’s a plain old skirt.  Over black tights.)  We all had salads, mostly Mediterranean with  olives and shredded chicken.  The vinaigrette with feta cheese dressing was especially good.

I wonder what the t-shirt message equivalent would be for a cat?  I suppose this would depend on the cat’s mood.  On a nice lazy morning while lolling in the sunny spot on the sofa it might be, “Life’s Short. Purr loud.”  On the occasion of being put in a carrier to go to the vet: “Life’s Short. Scratch deep.”  When the dry food plate is empty, “Life’s short.  Howl Incessantly.”  Etcetera.

Howling incessantly sometimes works and sometimes does not.  When my cats howl they usually get their way. I on the other hand have no such luck.  If you are a cat and you howl over your empty plate and the answer from your owner is, “I understand,” but the plate remains empty, what’s a kitty to do?  Scratch deep?  Not an option if de-clawed.  Run away from home?  Pah.  It’s too warm in here.  Sit in the corner with a pout, and personify the sourpuss?  How inelegant.

I would rather be purring loudly.  Can someone please point me in the direction of the sunny spot on the sofa?  I can’t seem to find it on my own today.