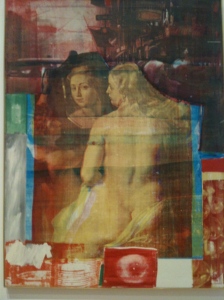 As I am writing on Cunningham, Cage and Rauschenberg this weekend it seems reasonable to be looking at a Rauschenberg whenever possible.  This project will end up in print eventually, but right now I am still reading, looking, thinking, turning over in my mind the overlapping and divergent aesthetics of these three artists and their legendary collaborations (the first of Bob’s “combines” was created as a set piece for a Cunningham dance in 1954)  during the early “pop art” era when John was making sound with prepared pianos and Merce was throwing yarrow sticks to determine aspects of his choreography and Bob was (as John was) wreaking havoc with the conventionally agreed-upon lines between “art” and the everyday.

Some facts about persimmons:  Persimmons, it turns out, are best eaten fully ripened.  With ripeness they lose their tannic quality and become, inside their skins, jelly-ish and pulpy and sweet and tangy.  They may be consumed cooked or raw, and are especially popular in Asia and Iran.  Don’t eat persimmons on an empty stomach.  When you slice a raw persimmon open, it looks like a star.

I wonder why Bob named this 1964 silkscreen Persimmon.  The central image reproduces a portion of Peter Paul Rubens’s Venus at a Mirror (c. 1615).  The goddess is considering herself.  The painter is considering the goddess.  Front, back.  Direct, indirect. Literal, reflective.  Ever the colorist, Rauschenberg plugs a big blood-red eye at the bottom of the image, looking directly at the viewer.

Duchamp posited that the viewer completes a work of art.  Today’s completion of Persimmon can be completely different from tomorrow’s.   The red eye feels to me like a warning, about the risks of getting out of the way.  But perhaps it is the eye of a creature that ate an unripe persimmon. Or the eye of a cat who just spied a preoccupied bird.  The ripe blonde goddess may be ready for consumption…but woe unto those who forget, she is a goddess.

“I am trying to check my habits of seeing, to encounter them for the sake of greater clarity.  I am trying to be unfamiliar with what I’m doing.”  -Robert Rauschenberg, as quoted by John Cage in Silence.

Persimmon is in the permanent collection of the Art Institute of Chicago and is on display in the Modern Wing gallery covering 1960-present.